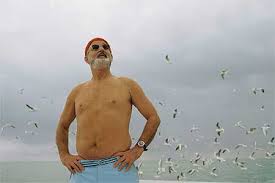 The Life Aquatic with Steve Zissou gets four stars from me. What an all around enjoyable movie! Everything about this movie was satisfying. The costumes were great. As ridiculous as they were, I found myself wanting to wear one. The acting was perfectly over the top. Angelica Houston, Owen Wilson, Willhem Defoe, and Bill Murray and everyone else all carried their parts to just enough beyond absurd to be believable, or rather to suspend my disbelief. The soundtrack was intense and active. The animation was done to perfection. Mostly because it was meshed with the music and words and action so perfectly. The story was simple and yet profound, mainly because of the ridiculousness of everything coming together to create a sort of uber seriouness. In short, it worked. It was brilliant. I loved it.

If I were to pick the top three movies I have seen in 2005 this is one of them. The other two are “I Heart Huckabees” and “Kung Fu Hustle”. I’m not qualified to put one of these three above the other…but see them all….