This is so bizarre that I don’t even have to wonder why I didn’t think of it.
cd 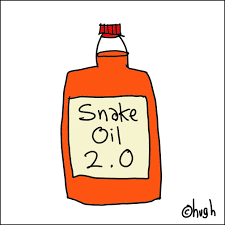 MONROE, La. – A man was sentenced to more than four years in prison for bilking friends and family out of more than $800,000 by convincing them that his wife was a government agent who could arrange to have their medical problems diagnosed by satellite imaging.
Brent Eric Finley, 38, of Rayville, was sentenced in federal court in Monroe to serve 51 months in prison followed by three years of supervised release. His wife, Stacey Finley, was sentenced in August to spend 63 months in prison and both are ordered to jointly pay restitution in the amount of $873,786.94.
The Finleys pleaded guilty in August to wire fraud, according to court records.
U.S. Attorney Donald W. Washington said in a news release following Monday’s sentencing of Brent Finley that the couple convinced numerous people that Stacey Finley was a CIA agent and with her contacts she could schedule a medical scan of the victims’ bodies by satellite imaging that would detect any hidden medical problems.
The Finley’s convinced their victims that, if any medical problems were found, secret agents would administer medicine to them as they slept in exchange for payment, according to a bill of information filed when the Finleys were charged in May.
“These audacious criminals should remind all of us that scam artists will go to great lengths to take our life’s savings,” Washington said.