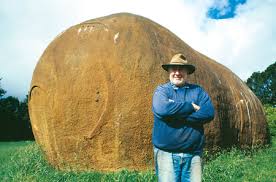 Science Daily — To think that world domination could have begun in the cheeks. That’s one interpretation of a discovery, published online September 9 in Nature Genetics, which indicates that humans carry extra copies of the salivary amylase gene.
Humans have many more copies of this gene than any of their ape relatives, the study found, and they use the copies to flood their mouths with amylase, an enzyme that digests starch. The finding bolsters the idea that starch was a crucial addition to the diet of early humans, and that natural selection favored individuals who could make more starch-digesting protein.
“Extra gene copies are an easy way for evolution to ramp up expression of a protein,” said Nathaniel Dominy, assistant professor of anthropology at University of California, Santa Cruz, and one of the paper’s authors. “Why wait for chance mutations to improve gene function? Natural selection can favor duplicate copies of a gene that already works well, and enzyme production will increase.”
Other primates eat mainly ripe fruits containing very little starch. A new ability to supplement the diet with calorie-rich starches could have fed our large brains and opened up new food supplies that fueled our unrivaled colonization of the planet, Dominy said.