Well, they planted the flag under the pole and the world waits on baited breath…
cd 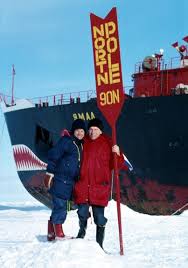 CHARLOTTETOWN, Prince Edward Island (Reuters) – Canada on Thursday dismissed Russia’s claim to a large chunk of the resource-rich Arctic, saying the tactic was more suited to the 15th century than the real world.
A Russian submersible on Thursday dived beneath the ice under the North Pole and planted a titanium flag on the seabed, staking a symbolic claim as Moscow seeks to extend the territory in the Arctic it controls right up to the North Pole.
“This isn’t the 15th century. You can’t go around the world and just plant flags and say ‘We’re claiming this territory’,” said Canadian Foreign Minister Peter MacKay.
“There is no threat to Canadian sovereignty in the Arctic … we’re not at all concerned about this mission — basically it’s just a show by Russia,” he told CTV television.
The five states with territory inside the Arctic Circle — Canada, Norway, Russia, the United States and Denmark via its control of Greenland — have a 320 km (200 mile) economic zone around the north of their coastline.
Russia says its expanded claim is justified because the Arctic seabed and Siberia are linked by one continental shelf.
Canada’s Conservative government is vowing to assert sovereignty over its Arctic lands and waterways. Last month Ottawa said it would build up to eight patrol ships designed to operate in the frozen region, which is believed to hold huge untapped oil and gas reserves.