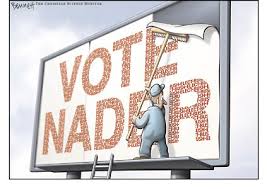 Activist and sometime presidential candidate Ralph Nader, who ran in both 2000 and 2004, said yesterday he will decide by the end of this year whether he will again run in 2008.
“They are converging more and more,” Nader said of the Republican and Democratic parties in an interview. “They are clearly more similar than they were 30 or 40 years ago.”
Democrats were frustrated with Nader after the 2000 election, believing he took away potential votes that could have helped Al Gore win the White House, and the feeling is mutual. Nader also announced yesterday that he is suing the Democratic National Committee, which he accused of a conspiracy to violate his constitutional rights to run for president by filing ballot challenges and taking other measures to keep him off the ballot in 2004. Nader argued that these challenges cost thousands of dollars and made it more difficult for him to run.
In an interview, Nader specifically criticized Senators Hillary Clinton and Barack Obama, the leading Democratic candidates, for being “very nonspecific” in how they would get U.S. troops of Iraq.