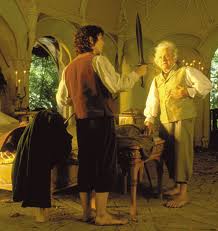 WASHINGTON – Scientists, wringing their hands over the identity of the famed “hobbit” fossil, have found a new clue in the wrist. Since the discovery of the bones in Indonesia in 2003, researchers have wrangled over whether the find was an ancient human ancestor or simply a modern human suffering from a genetic disorder.
Now, a study of the bones in the creature’s left wrist lends weight to the human ancestor theory, according to a report in Friday’s issue of the journal Science.
The wrist bones of the 3-foot-tall creature, technically known as Homo floresiensis, are basically indistinguishable from an African ape or early hominin-like wrist and nothing at all like that seen in modern humans and Neanderthals, according to the research team led by Matthew W. Tocheri of the Smithsonian’s National Museum of Natural History.
That indicates that it is an early hominin and not a modern human with a physical disorder, they contend.
“It seals the deal,” Tocheri said in a telephone interview.
The specimen he studied lived on the Indonesian island of Flores about 18,000 years ago, a time when early modern humans populated Australia and other nearby areas.
Scientists had thought humans had the planet to ourselves since Neanderthals died out about 30,000 years ago, and the discovery of Hobbits indicates another evolutionary cousin who coexisted longer, Tocheri said.
It isn’t known whether humans and Hobbits coexisted on that island, he said, but it is clear we shared the planet for some time.
“Basically, the wrist evidence tells us that modern humans and Neanderthals share an evolutionary grandparent that the hobbits do not, but all three share an evolutionary great-grandparent. If you think of modern humans and Neanderthals as being first cousins, then the hobbit is more like a second cousin to both,” Tocheri said.
When the bones were first discovered some scientists declared them the remains of a new, dwarf species of human ancestors. Because of its tiny stature it was quickly dubbed the “Hobbit,” from the creature in the books by J.R.R. Tolkien.
Dean Falk of Florida State University said the new report helps confirm that conclusion.
“This is exciting and should help settle things,” she said. “The authors are to be congratulated, not only for describing important new details about ‘Hobbit,’ but for shedding light on the evolution of the wrist and how it might have related to tool production.”
But others have questioned whether it was really a new species. Robert D. Martin of the Field Museum in Chicago and co-authors challenged the original classification, arguing that it appears to be a modern human suffering from microencephaly, a genetic disorder that results in small brain size and other defects.
There are things that can go wrong in the development of the wrist, Tocheri said, but they don’t result in a complete change of design from modern human to chimpanzee or gorilla wrist.
Nonetheless, Martin said he is standing by his position.
“My take is that the brain size of (that specimen) is simply too small. That problem remains unanswered,” he said in a telephone interview.
“People ask me whether this new evidence changes anything, well it doesn’t,” he said. “I think the evidence they’ve presented is fine, it’s the interpretation that is problematic.”