A must see film. One might think that a group of thousands of displaced and starving boys, witnesses to brutal violence, would create a culture a la Lord of the Flies. Instead the boys bonded and supported each other and at least some of them are wise and compassionate far beyond their years. Daniel founded “Parliament” as a meeting place and distraction. John sought out the American photographers in their Kenya refugee camp, thinking they were representatives of the government, to plead that other boys be allowed to emigrate. See this film to put your own problems in perspective and learn from these wise souls. 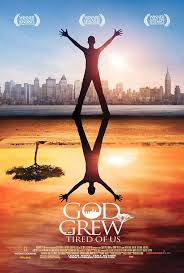 Winner of both the Grand Jury Prize and the Audience Award at the 2006 Sundance Film Festival, GOD GREW TIRED OF US explores the indomitable spirit of three “Lost Boys” from the Sudan who leave their homeland, triumph over seemingly insurmountable adversities and move to America, where they build active and fulfilling new lives but remain deeply committed to helping the friends and family they have left behind.
Orphaned by a tumultuous civil war and traveling barefoot across the sub-Saharan desert, John Bul Dau, Daniel Abol Pach and Panther Bior were among the 25,000 “Lost Boys” (ages 3 to 13) who fled villages, formed surrogate families and sought refuge from famine, disease, wild animals and attacks from rebel soldiers. Named by a journalist after Peter Pan’s posse of orphans who protected and provided for each other, the “Lost Boys” traveled together for five years and against all odds crossed into the UN’s refugee camp in Kakuma, Kenya. A journey’s end for some, it was only the beginning for John, Daniel and Panther, who along with 3800 other young survivors, were selected to re-settle in the United States.

God Grew Tired Of Us