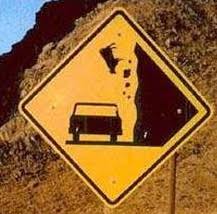 Falling cow smashes van near Manson
By The Associated Press
MANSON, Chelan County — A Chelan County fire chief says a couple were lucky they weren’t killed by a cow that fell off a cliff and smashed their minivan.
District 5 Chief Arnold Baker says they missed being killed by a matter of inches Sunday as they drove on Highway 150 near Manson.
The 600-pound cow fell about 200 feet and landed on the hood of the minivan carrying Charles Everson Jr. and his wife Linda of Westland, Mich., who were in the area celebrating their one-year wedding anniversary. They were checked at Lake Chelan Community Hospital as a precaution.
The van was heavily damaged, including a broken windshield.
Charles Everson says he kept repeating, “I don’t believe this. I don’t believe this.”
The year-old cow had been reported missing by a breeder. It was euthanized at the scene.