Whew! It looks like the U.S. is finally a prison state…the United States of Prison. btw…a few months ago the USA was added to the Canadian list of countries that torture…three days later after a flurry of phonecalls the U.S. was taken off the list. Now the U.S. and Canada have opted to have cross border military operations. We’re going to come put you in jail Canadians…we’re coming. First us now you.
cd 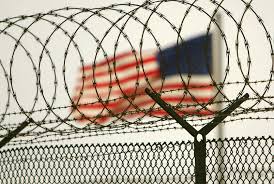 For the first time in the nation’s history, more than one in 100 American adults is behind bars, according to a new report.
Incarceration rates are even higher for some groups. One in 36 Hispanic adults is behind bars, based on Justice Department figures for 2006. One in 15 black adults is, too, as is one in nine black men between the ages of 20 and 34.
The report, from the Pew Center on the States, also found that only one in 355 white women between the ages of 35 and 39 are behind bars but that one in 100 black women are.
The report’s methodology differed from that used by the Justice Department, which calculates the incarceration rate by using the total population rather than the adult population as the denominator. Using the department’s methodology, about one in 130 Americans is behind bars.
Either way, said Susan Urahn, the center’s managing director, “we aren’t really getting the return in public safety from this level of incarceration.”
But Paul Cassell, a law professor at the University of Utah and a former federal judge, said the Pew report considered only half of the cost-benefit equation and overlooked the “very tangible benefits — lower crime rates.”
In the past 20 years, according the Federal Bureau of Investigation, violent crime rates fell by 25 percent, to 464 for every 100,000 people in 2007 from 612.5 in 1987.
“While we certainly want to be smart about who we put into prisons,” Professor Cassell said, “it would be a mistake to think that we can release any significant number of prisoners without increasing crime rates. One out of every 100 adults is behind bars because one out of every 100 adults has committed a serious criminal offense.”
Ms. Urahn said the nation cannot afford the incarceration rate documented in the report. “We tend to be a country in which incarceration is an easy response to crime,” she said. “Being tough on crime is an easy position to take, particularly if you have the money. And we did have the money in the ‘80s and ‘90s.”
Now, with fewer resources available, the report said, “prison costs are blowing a hole in state budgets.” On average, states spend almost 7 percent on their budgets on corrections, trailing only healthcare, education and transportation.
In 2007, according to the National Association of State Budgeting Officers, states spent $44 billion in tax dollars on corrections. That is up from $10.6 billion in 1987, a 127 increase once adjusted for inflation. With money from bonds and the federal government included, total state spending on corrections last year was $49 billion. By 2011, the report said, states are on track to spend an additional $25 billion.
It cost an average of $23,876 dollars to imprison someone in 2005, the most recent year for which data were available. But state spending varies widely, from $45,000 a year in Rhode Island to $13,000 in Louisiana.
The cost of medical care is growing by 10 percent annually, the report said, and will accelerate as the prison population ages.
About one in nine state government employees works in corrections, and some states are finding it hard to fill those jobs. California spent more than $500 million on overtime alone in 2006.
The number of prisoners in California dropped by 4,000 last year, making Texas’s prison system the nation’s largest, at about 172,000. But the Texas legislature last year approved broad changes to the corrections system there, including expansions of drug treatment programs and drug courts and revisions to parole practices.
“Our violent offenders, we lock them up for a very long time — rapists, murderers, child molestors,” said John Whitmire, a Democratic state senator from Houston and the chairman of the state senate’s criminal justice committee. “The problem was that we weren’t smart about nonviolent offenders. The legislature finally caught up with the public.”
He gave an example.
“We have 5,500 D.W.I offenders in prison,” he said, including people caught driving under the influence who had not been in an accident. “They’re in the general population. As serious as drinking and driving is, we should segregate them and give them treatment.”
The Pew report recommended diverting nonviolent offenders away from prison and using punishments short of reincarceration for minor or technical violations of probation or parole. It also urged states to consider earlier release of some prisoners.
Before the recent changes in Texas, Mr. Whitmire said, “we were recycling nonviolent offenders.”