I just bought this fine Mercedes a few minutes ago. Funny thing At the moment, I am blogging from the sidewalk where it is parked and awaiting a tow truck. The deal was too odd to pass up. I saw it on craigslist for $200. I agreed to meet the lady and took it for a drive, it ran fine but a little bit hot. I know I am leaving in a few months, but I figured a Mercedes station wagon would be fun to have for my last months in Hawaii and the price was right. So anyway, we met, I drove it we signed the paperwork, I gave her the money and drove off and then two minutes later, the radiator blew up. She came out and gave me my money back and offered to give me the car for free. I accepted. So it was free. Now I am waiting for the tow truck she called to have it towed to my friend Priams so he can see if it was only the hose that blew off or if there are more serious problems. She has AAA so the towing is free, we will see what Priam says. This might be one of those messages from the universe, or it could be a way of the universe giving me a Mercedes. We will see very soon. I am laughing my ass off, hopefully it won’t end up being a very expensive Trojan horse, but only time will tell. In any event, I am glad there is wifi here so I can share it with everyone. I officially dub my new car Horse, and we will see if I need to attach Trojan to the name or not.
30-10-08_1705.jpeg

Wow. The Republicans are looking to the past to define the future…past issues of the Onion that is.
http://www.jedreport.com/2008/10/roy-the-forklift-driver.html

Who knew that life would ever be as interesting as it has become. I’m not talking about blogging about the news…which I have become fairly tired of, but am doing while my life is focused on completing school…but that all will change soon enough. I’m excited about the coming changes as existensis becomes my travel blog and more. More what I am talking about is technology. In the past few days, I have contacted and been contacted by the little girl who in the third grade told me that I should become a storyteller and also my first real friend who I used to run around the National Forest in Big Bear with when we were five. And a whole lot of other friends that I thought were gone from my life. Absolutely astounding and wonderful. The world we are moving into is wonderous if we can only survive long enough to enjoy it.
Since I’m carping about blogging the news, I figure I might as well do that a little. By the way, thanks to Paul Dylan for pointing out just how bizarre the collapsed shanty story has become, unbelievable that the guy was injecting people with his own concoctions, ran for mayor, and is obvously a complete nutter ala Dr. Jekyl/Mr. Hyde.
And you had to wonder who Stephen Colbert would endorse…or how he would do it… And here is what al Queda has to say:

An al Qaeda leader has called for President George W. Bush and the Republicans to be “humiliated,” without endorsing any party in the upcoming U.S. presidential election, according to a video posted on the Internet.
“O God, humiliate Bush and his party, O Lord of the Worlds, degrade and defy him,” Abu Yahya al-Libi said at the end of sermon marking the Muslim feast of Eid al-Fitr, in a video posted on the Internet.
Libi, one of the top al Qaeda commanders believed to be living in Afghanistan or Pakistan, called for God’s wrath to be brought against Bush equating him with past tyrants in history.
The remarks were the first comments from a leading al Qaeda figure referring, albeit indirectly, to the U.S. elections. Muslim clerics often end sermons by calling on God to guide and support Muslims and help defeat their enemies.

Also, never mind Dubai, check out the beautiful architecture that is emergeing in Kazakhstan.

And where do you go these days to see great art? Why not check out the public toilet in Munich?
And finally, are you a Phoenician?

Check this out…it makes me feel excited and terrified at the same time…this is real.

A quick look at the paper this morning made reminded me why I am leaving Hawaii. Jobs are down, tourism is down, rents are up as owners try to make their mortgages, and in general, even though I am one of the best tour guides on Oahu, there isn’t much of a future for me here at the moment. I reserve the right to return, but I am definitely out of here before 2009.
First, if you are interested, here are the numbers…keep in mind that these are painted to be less grim than they really are from the ground….
Tourism slumps 19.5% in September.
This doesn’t necessarily reflect that hotels are all 50% full and most of that is people who own timeshares. Also, in terms of tipping….ummmm….lets just say that most visitors are thinking of two numbers and picking the lower and then cutting it in half.
Now, check this out for the rent situation: Collapse reveals Hidden Homeless.

Yesterday as I was driving the Oahu Nature Tours Van to pick up guests to take hiking, I was overtaken by a minivan, a black excalade, and eight police vehicles. As the Escalade went by, I realized it was probably Obama. Even though I am voting for Nader and am disappointed at the concessions Obama has made towards moderates, I am rooting for him to win. The alternative is entirely too god-awful to think about. So anyway, the windows in the back of the Escalade were tinted pretty dark, but I’m pretty sure the figure sitting back there was Obama and I’m also pretty sure that he gave a shaka back at me. For those who don’t know, the shaka is a hand sign that looks like this: 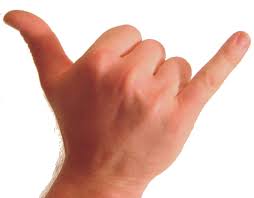 The “shaka” sign is a common greeting gesture. It is often associated with Hawaii and sports such as surfing, kitesurfing, skateboarding, skimboarding, snowboarding and skydiving. It consists of extending the thumb and pinky finger while keeping the three middle fingers curled, and raising the hand as in salutation with the back of the hand facing the person that is being greeted; sometimes the hand is rotated back and forth to emphasize the sign.
Hawaiian locals use the shaka for various meanings, like “all right”, “cool”, “smooth”, etc. Residents of states other than Hawaii who use the shaka may describe it as meaning “hang loose”. It is also used to convey what locals in Hawai’i call the “Aloha Spirit,” a gesture of friendship and understanding between the various ethnic cultures that reside within Hawai’i. It can also be used to signal a “hello”, “goodbye”, ” ’till next time”, “take care”, “Alright!”

I’ve determined that God is like a person in a coma. They are aware of the people around them, they hear the people in the room, but there is nothing they can do to affect the environment of the room itself. I think God is like syntax and grammar, the invisible glue that holds things together and makes the difference between marks/sounds and language. God is composed of the sticky bits that hold it all together and thus, God is actually a part of all of us and we are thus a part of God. I think I had a conception of this at 16 but I couldn’t state it quite this clearly. Like talking to the person in the Coma, it makes a difference if you talk to and acknowledge God, but you are invariably disappointed if you expect a response.
Have you ever noticed how whenever you make concrete steps to leave a party, things invariably get more interesting? That’s how I feel about my forthcoming departure from Hawaii.
Of course, the thing with peoples in comas is that they sometimes wake up.
My friend Steve believes that our ultimate goal in life is to provide orgasms for each other. I think that is a pretty great concept, but it needs to include intellectual and spiritual orgasms as well. Kind of gives a whole new meaning to Sunday Service, doesn’t it?