Since Sunday 19 the Zapatista National Liberation Army (EZLN) has been on general red alert with EZLN troops called into the mountains of Chiapas, and Zapatista communities advised to flee by their Juntas de Buen Gobierno (Governing Councils), amid fears that war in Chiapas is likely to resume. The Zapatista “Caracoles” or “centers of zapatista autonomy” have also been closed [Pics of the Caracoles La Garrucha and Morelia]
A communique from the Clandestine Revolutionary Indigenous Committee General Command (CCRI-CG) of the EZLN declared a general red alert throughout all Zapatista territory. Members of the autonomous administrative bodies are being evacuated from the various autonomous municipalities and internationals are being urged to leave.
On Monday 20 another communique explained the red alert as a precautionary defensive measure in response to the Mexican governments continued attacks and betrayal, stating that the EZLN is ‘returning the word it gave on the first of January of 1994’.
On Tuesday 21 the next communique reassured that the Zapatistas have re-organised so as to survive an attack on their clandestine leadership by government forces or paramilitaries: ‘the CCRI-CG of the EZLN is letting it be known that conditions are in place to continue leading the Zapatista struggle even if it were to lose, be it through jail, through death or through forced disappearance’. On the same day, Subcomandante Insurgente Marcos addressed the national and international civil society with another “letter of explanation and/or, perhaps, farewell” that, amongst other things, states that the Zapatistas are not preparing a military ofensive. It starts with: ‘This is not a letter of farewell. At times it is going to seem as if it is, that it is a farewell, but it is not. It is a letter of explanation. Well, that is what we shall attempt. This was originally going to go out as a communique, but we have chosen this form because, for good or for bad, when we have spoken with you we have almost always done so in this most personal tone.’
On Sunday 26 another communique is published by the EZLN which states that “The CCRI-CG of the EZLN is informing you that it has finished consulting with tens of thousands of support bases.” and that “The results were that more than 98% approved the new step, and less than 2% decided not to support the EZLN’s proposal.”
On Wdnesday 26 the Six Declaration of the Selva Lacandona is published by the Clandestine Revolutionary Indigenous Committee – General Command of the Zapatista Army of National Liberation. The text does a balance of the last 12 years of Zapatista struggle for autonomy and indigenous rights, and points to the fact that “we have reached a point where we cannot go any further, and, in addition, it is possible that we could lose everything we have if we remain as we are and do nothing more in order to move forward”, and that “the hour has come to take a risk once again and to take a step which is dangerous but which is worthwhile”.

In this photo released by World Wildlife Fund-National Geographic, two Thai fishermen show a 293-kilogram (646-pound) giant catfish they caught from the Mekong River in Chiang Khong district of Chiang Rai province, northern Thailand Saturday, June 11, 2005. Thai fishermen have caught this giant catfish believed to be the world’s heaviest living freshwater fish but died and was eaten after environmentalists and officials negotiated for its release to allow it to spawn. (AP Photo/Suthep Kritsanavarin, HO)

POLITICS-AFRICA:
Bush Exaggerates Increase in U.S. Aid
Jim Lobe
WASHINGTON, Jun 27 (IPS) – U.S. President George W. Bush has been significantly exaggerating the amount of money his administration has provided in aid to sub-Saharan Africa, according to a new study released here Monday.
Instead of a tripling of U.S. aid to Africa between 2000 and 2005, as Bush has frequently insisted, Washington has increased aid by only 56 percent in real terms, according to the report by the Brookings Institution.

By ERIC ASIMOV
Published: June 29, 2005
ON a hot summer night, a beer need only be cold and wet to satisfy. But consider if the standard were set a little higher. Imagine a beer that offered more than the internal equivalent of holding a cold, glistening bottle against a flushed and sweaty forehead. What if that beer did not merely satisfy, but inspired?

Rhizome.org: RHIZOME ARTBASE 101
Rhizome ArtBase 101 surveys salient themes in Internet art, a practice that has flourished in the last ten years. The exhibition presents forty selections from Rhizome.org’s online archive of new media art, the ArtBase, which was launched in 1999 and currently holds some 1,500 works by artists from around the world. Featured works are grouped by ten unifying themes and include seminal pieces by early practitioners as well as projects by some of the most pioneering emerging talents working in the field today. Encompassing software, games, moving image and websites, Rhizome ArtBase 101 presents the Internet as a strapping medium that rivals other art forms in its ability to buttress varied critical and formal explorations.

France to Be Site of World’s First Nuclear Fusion Reactor – New York Times
PARIS, June 28 – France won an international competition today to be the site of the world’s first nuclear fusion reactor, an estimated $12 billion project that many scientists see as essential to solving the world’s future energy needs.

A woman named Tima sent me an email…here it is…
“To Chris…Your programs are offensive. Your views are primitive. Who do you think you are to broadcast to the world? Your views are offensive, your information is incomplete, and your comprehension is narrow. When I heard your drunken dissertations I wanted to vomit and believe me, I wasn’t drinking. Stop now. You are an embarrassment to everyone that knows you. I am sure.”
Here is my response:
Thanks Tina ( I think you hit the wrong key…m and n are right next to each other) I am always excited to hear from fans. I’m guessing you have listened to all of my fuknpodcasts. You seem to know me better than most. Thanks.
I can definitely empathize with your wanting to vomit. That happens to me regularly. You’re right, that is usually when my friends get embarrassed.
To give you a little insight into me….I’m a guy that has been a stock broker, an air traffic controller, a U.S. Marine, a DJ, a waiter, a cook, a driver, and about 200 other professions. I narrowly avoided becoming a pimp and probably the definition of a drug dealer doesn’t apply to me. In case you are wandering, I’ve never killed anyone and will do my best to avoid that in the future.
In light of the above, I think you are probably stuck listening to me. I’ll try to make sure a fuknpodcast gets posted every Thursday night.
Thanks for listening and thanks for your support.
Damitio 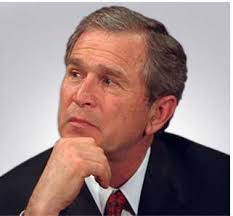 some of these are too hard to believe and yet…they come out of the president’s mouth.. for example
“See, in my line of work you got to keep repeating things over and over and over again for the truth to sink in, to kind of catapult the propaganda.”—Greece, N.Y., May 24, 2005
The Complete Bushisms – Updated frequently. By Jacob Weisberg

There’s more to jazz than Kenny G and Wynton Marsalis.

Jazz Article Center @ All About Jazz
Building a Jazz Library